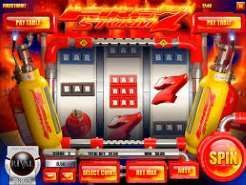 Play Now
Firestorm 7is a fiery and bright slots game produced by Rival powered gaming offering three reels and one payline. In this game, fire and gas canisters fill the screen where gas tanks, gold bars, gold sevens, blue sevens, red sevens, lighters, and yellow sevens fill the reels. Firestorm 7 offers players an autoplay button for those players who might want to preset the spinning reels and bets, and players have a setting to turn the game's sound on or off.

Three Reels and One Payline

Although there is only one payline, players can place one, two, or three coin bets and choose from a selection of coin sizes as large as $10. The maximum bet per spin is $30. Online players access the game directly through the casino's web browser or can download the casino and game. Mobile casino players have direct access at all times of the day and night, through the mobile web browser of their device, using Android, Apple, and Windows platforms or the player can download to his mobile device the online casino app for their casino, giving the player direct instant access to the game and fun with just one tap on the screen.